Over 30 notes Sankyo luxurious Music Box series "Orpheus" was named after a minstrel master "Orpheus" of Greek mythology . The Sankyo "Orpheus" music box have very deep sound true to its name. We reproduced the "needling" techonology which means "driving needles into the cylinder of music box". The needling technology has been polished among skilled craftmen of Europe of the 19th century. 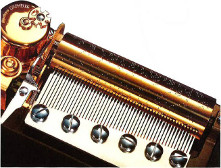 By moving sideway the cylinder, it can play multiple tracks of 2 songs, 3 songs, and also can play one long song."Movie of moving sideway cylinder".Please enjoy the splendid music box sound which Japan's largest manufacturer Sankyo boasts.

Lyra which shines in the summer night sky of harp is a motif of the mark.