about The Music Box

The History of Music Box

～Music Box has changed its role with the history～

To Tell the Time to people

It is said that the original form of a music box was the bell to be called Carillon① which was placed in a large clock tower to tell the time to people throughout the town in the Middle Ages in Europe. Afterward, the invention of spring and the development of clock made bells small. Large bells of Carillon were replaced to small bells, and later formed into the current music box with applying the tuned teeth of a steel comb. The music box functioned as a time signal device by being a part of clock.

To Listen the Music Anytime, Freely

"We want to listen to the music anytime, freely!" The dream and the wish of the people in those days have pushed to developing the technologies of music box and also separated the music box from clock as automatic musical instruments. Music box soon entered the golden age as only audio instrument. Music boxes on those days are displayed at the museum as "Antique Music Boxes" now. Sankyo also owns about ninety of antique music boxes today. In the end of the eighteenth century, Cylinder Music Box② was produced mainly in Switzerland. Later Disc Music Box③ was invented in Germany, and entertained people with its beautiful sounds. At the same time, invention of Phonograph④ led music box to end its role of popularizing and telling music moreover. The music box industry declined with approaching the footsteps of the World War I. 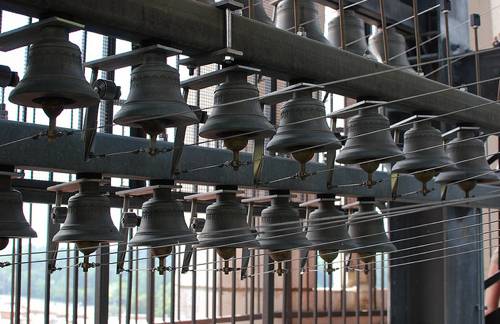 It is said that in the fourteenth century Carillon was first placed in the Nicolas Karc Tower in Brussels, Belgium.

In 1796, it was invented by Swiss watchmaker 'Antoine Favre'.Many cylinder music boxes were produced in Switzerland.

It is said that it was invented by German Paul Lockmann in 1886. After the Industrial Revolution, it was produced mainly in Germany,and also in Switzerland, and later the greatest manufacturer was born in the United States, which was the largest market at that time.

Music box was soon taken its place of leading role as mechanical instrument to Gramophone which was invented by Thomas Edison in 1877 and wide spreading of Disc gramophone to be invented by Emil Berliner in 1887.

The word ORUGOURU is Japanese?

As the trades between Netherlands and Japan gets active, a musical clock and a organ were brought by the Dutchs, and Japanese people memorized a mysterious box that plays music as ORUGEL, which later became ORUGOURU when it was told people to people.In Europe and the U.S., a box with playing music by plucking the tuned teeth of steel comb was originally called Music Box or Musical Box.ORUGEL means the organ in Dutch.ORUGOURU is Japanese Dutch that can only be understood in Japan.

Sankyo and the History of Suwa's Music Box.

In 1946, a year after the World War II, Sankyo Seiki(now Nidec Sankyo Corporation) was established at Suwa, and 2 years later Sankyo started developing a music box. The first 6 sets of music boxes(which played "Hanschen klein") were produced experimentally but the teeth were broken soon one after another. Though remained 2 sets, it was said bad sound as like striking the bottom of a bucket. In the end of 1948, Sankyo finally was able to ship its first 500 music boxes. Later, Sankyo once provided over 90% of worldwide music box industry with the development, production engineering and the global sales network.